Benguet farmer cooperators and partners under the project funded by the Philippine Council for Agriculture, Aquatic and Natural Resources Research and Development of the Department of Science and Technology (DOST-PCAARRD) make their vegetable produce available for Benguet and Metro Manila communities.

The said project is titled, “Disaster Risk Reduction of Climate Change Impacts in Vegetable Terrace Farms in Benguet,” which is lodged under the Science and Technology (S&T) Action Frontline for Emergencies and Hazards (SAFE) Program. SAFE Program is a technology transfer modality of DOST-PCAARRD.

In Kibungan, Benguet, Mrs. Marina Bugtong and members of the Madaymen Good Agriculture Practitioners Association (MGAPA), in coordination with Barangay Captain Homer Teliaken, were able to pack and donate vegetables such as carrot, potato and cabbage to affected families in their community. Barangay Captain Teliaken and Mrs. Bugtong were among the SAFE-Disaster Risk Reduction (DRR) champions who were trained by the project to respond in times of emergencies and hazards.

Another project partner in Tublay Benguet, the Tublay Agriculture Based League of Entrepreneurs (TABLE), were also able to market around two tons of highland vegetable in Manila through the initiative of Hon. Mayor Armando Lauro and Municipal Agriculturist Jeffrey Sotero. 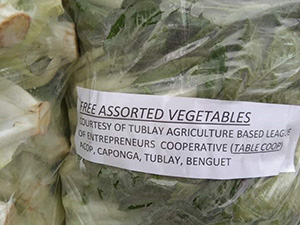 Additional 650 kilos of assorted vegetables were also donated by TABLE during the relief operations of the Philippine Business for Social Progress (PSBP) in Intramuros, Manila. The transport of the vegetables was made possible through the efforts of the local government unit (LGU), Department of Agriculture-Cordillera Administrative Region (DA-CAR), and various non-governmental organizations (NGOs).

With the threat of COVID-19 and implementation of the enhanced community quarantine, the SAFE-DRR champions assured that quality vegetable will always be made available from their project for the next two to three months. This will coincide with the first cropping harvest of the farmer partners.

The program aims to capacitate farmers, barangay and municipal officials on disaster risk reduction, and climate change adaptation and mitigation through science and technology interventions at the farm and community levels in the Cordillera Administrative Region (CAR). The program is composed of six projects in the provinces of Abra, Apayao, Kalinga, Mt. Province, Ifugao and Benguet and implemented by the six state colleges and universities in CAR.