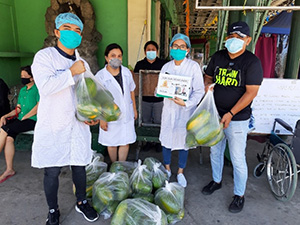 Fresh papayas produced in the Silan Agri-Farm in Indang, Cavite were recently distributed to 474 frontliners in the Cavite province. This was accomplished by the Philippine Council for Agriculture, Aquatic and Natural Resources Research and Development of the Department of Science and Technology (DOST-PCAARRD) through the Cavite State University (CvSU).

The Silan Agri-Farm is one of the sites of the Science for the Convergence of Agriculture and Tourism (SciCAT) Program of PCAARRD. SciCAT, is the result of technological convergence to improve the productivity and capacity of farms for sustainable practices while showcasing their beauty and attraction. The said farm is being supported through the CvSU project led by Dr. Ruel M. Mojica and Dr. Lilibeth P. Novicio.

CvSU held the first batch of its relief operations in Indang, Cavite, which benefitted 188 frontliners of the Rural Health Unit of the Department of Social Welfare and Development (DSWD), the Inter-Agency Task Force (IATF), the Municipal Environment and Natural Resources Office (MENRO), traffic enforcers, engineers, and the Philippine National Police (PNP).

Another batch of relief assistance was extended to 101 frontliners of the General Emilio Aguinaldo Memorial (GEAM) Hospital in Trece Martires, Cavite.

The team is scheduled to distribute the fourth batch of fresh papayas on the last week of April 2020.

The 15-hectare Silan Agri-Farm is owned by Magsasaka Siyentista (MS) Edilberto Silan and his wife, Ms. Shirley Silan. The farm produces dragon fruit, banana, papaya, cucumbers, eggplants, bitter gourds, and other vegetables. The Silan Agri-Farm is currently being transformed into a SciCAT farm site for tourists, students, educators, and technology transfer advocates, among others.

This initiative is one of the efforts of the Council to help alleviate the country’s situation amidst COVID-19 pandemic. Projects under the DOST-PCAARRD Agri-Aqua Technology Business Incubation (ATBI) program are also currently responding to the call for relief assistance. 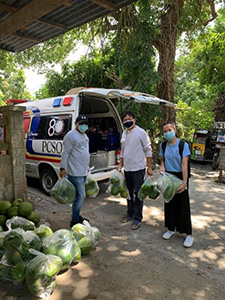 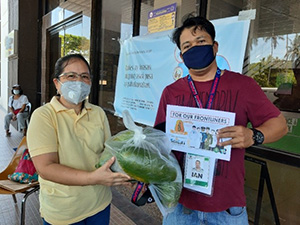