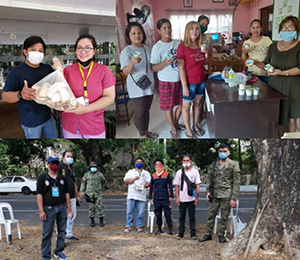 Food and non-food products were recently distributed to frontliners, health workers, and COVID-19 affected communities in Nueva Ecija and other localities. This was accomplished by the Philippine Council for Agriculture, Aquatic and Natural Resources Research and Development of the Department of Science and Technology (DOST-PCAARRD) through the incubatees of the Central Luzon State University Agricultural Technology Business Incubator (CLSU ATBI).

Led by CLSU Commercial and Business Development Office Director Dr. Rafael J. Pablo, Jr., the ATBI houses Mycosphere, Daerry’s Tilapia Ice Cream, Justainable Philippines, and Mrs. and Mr. Alfon’s, among others. These incubatees responded to the call for relief goods as the ATBI team mobilized to contribute to the provision of basic necessities to families and individuals affected by the enhanced and extended Community Quarantine, as stated in the Republic Act No. 11469, which is also known as the Bayanihan to Heal as One Act.

Frontliners deployed in Metro Manila received 1,700 bottles of calamansi juice produced by Justainable Philippines, Inc. The Office of Vice President Leni Robredo, through its Angat Buhay program, partnered with the said incubatee in hauling and distributing the products from April 15 to 17. 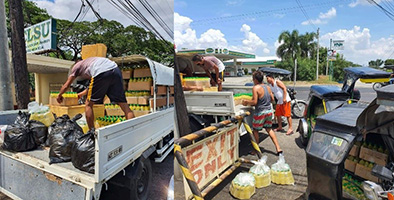 In a report, Dr. Pablo said that this response aims to embody DOST-PCAARRD’s commitment and its constant challenge to all TBIs to foster and nurture partnerships and collaborations.

Other members of the DOST-PCAARRD ATBI network have also been organizing relief assistance activities since the start of the COVID-19 pandemic. The ATBIs of the Benguet State University (BSU) and Sultan Kudarat State University (SKSU) started their efforts in March and April, respectively.

The three universities are among the 16 ATBIs that are currently being supported by the DOST-PCAARRD. ATBIs house mature technologies that are commercialized by supporting, nurturing, and establishing viable agribusinesses under the ATBIs’ care.