Duck eggs for frontliners in Sultan Kudarat and Davao 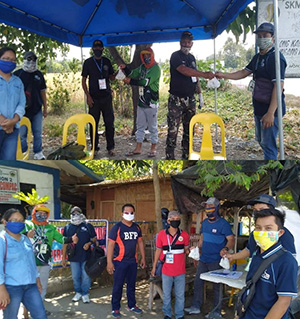 The COVID-19 pandemic has caused a lot of displacements all over the world, aside from putting a lot of lives at risk. At the fore front guarding the people are medical practitioners, the military, and logistics support personnel. These frontliners stake their own lives and are often distanced from their families in order to fulfill their jobs.

To help combat fatigue among these frontliners while manning critical COVID-19 checkpoints, the Philippine Council for Agriculture, Aquatic and Natural Resources Research and Development of the Department of Science and Technology (DOST-PCAARRD) Project Itik for Life, which was implemented by the Sultan Kudarat State University, offered a special package---Itik eggs!

Frontliners from 6 community police assistance centers (COMPAC) and 2 rural health units in Bagumbayan, Sultan Kudarat received 10 trays of boiled duck eggs and 5 trays of balut from the Project last week. This was the response of the Sultan Kudarat State University (SKSU) administration headed by its president, Dr. Rolando F. Hechanova, and the Itik for Life Project Team led by Mr. Michael John Benavidez to the call for support to the Bayanihan Act.

The eggs were outputs of the Itik for Life project, which is being implemented by SKSU to evaluate the production performance and egg quality of the Itik Pinas (IP)-Kayumanggi in Region 12. The IP-Kayumanggi is a strain of layer-type duck, which was developed thru a breeding and selection R&D project funded by PCAARRD. The current Itik for Life Project is funded by DOST and monitored by PCAARRD.

In the coming weeks, the Project hopes to distribute more balut and fresh eggs to other areas like Surallah, South Cotabato, as farmer cooperators in this area have expressed willingness to set aside their produce for their frontliners. 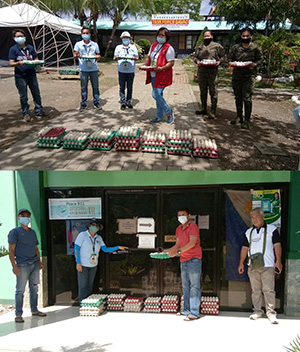 Meanwhile, a similar initiative was done in Davao. Reaching out to frontliners is the Department of Agriculture-Regional Field Office XI (DA-RFO XI), the lead agency in charge of the DOST-PCAARRD Itik for Life Project in Davao Region. They also donated duck eggs to barangay Manambulan, Tugbok District, Davao City as a way of sharing the project’s produce to the frontliners and priority needy families. Barangay Chairman Cris Pecassion and his staff received the products from the project Team led by Ms. Nida Gigayon of DA-RFO XI Research Division, the Project’s Regional Coordinator.

The Team also donated fresh duck eggs to Task Force (TF)-Davao in coordination with the Davao City-City Social Services Development Office, thru Ms. Elena Gabaton. PFC Joy B. Almendras received the goods in behalf of TF-Davao. Ms.Melody Manungas from the Davao City Mayor’s Office -Malasakit Center also witnessed the turn over. Just like the Sultan Kudarat Team, the Itik for Life-Davao Project will be reaching out to more frontliners in the coming days.